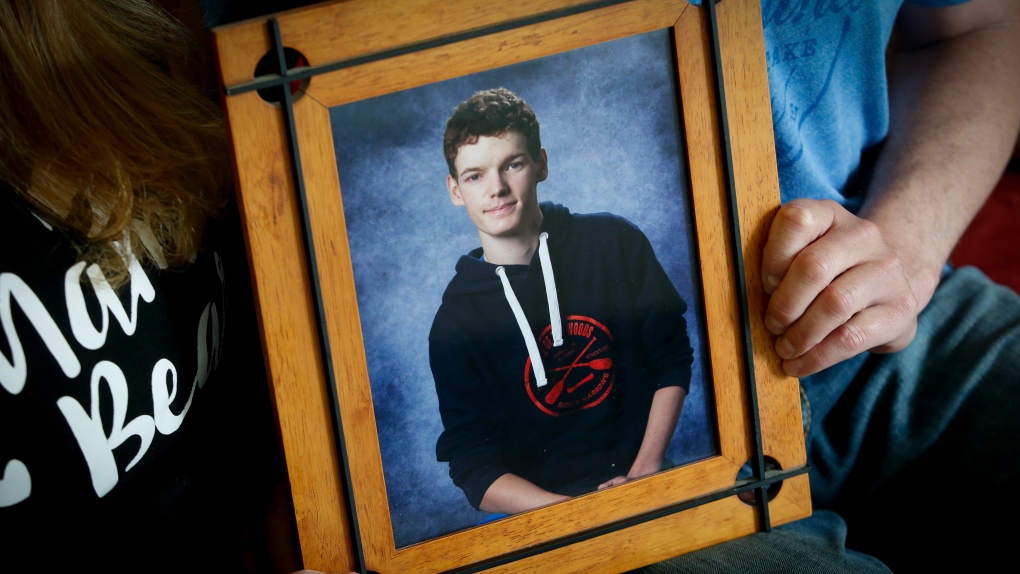 
Daniel Lints was kind and responsible with a witty sense of humour. The rural Manitoba teenager had a bright future and loving family. He played hockey and was a constant visitor to the nearby community pool.


He was a normal and happy 17-year-old until one chilly February day, he accepted a message request from what appeared to be an attractive young woman on Snapchat.


She coerced him into sending an explicit image. In minutes he was being blackmailed and within three hours he took his own life.


“I feel like he was murdered,” says Derek Lints, Daniel’s father, as tears stream down his cheeks.


Lints and his wife Jill say they are dealing with unimaginable tragedy. Daniel, whom most people called Danny, was the victim of a growing global sextortion scheme that is largely targeting teenage boys.


“I know Danny would have made a difference in this world,” Jill Lints says as she sits at the family’s kitchen table in Pilot Mound, Man., 180 kilometres southwest of Winnipeg. “He would have done good things and he already did do good things.


“The world lost a good person.”


Policing agencies around the world have been sending out urgent warnings about sextortion against boys.


The ruse is sophisticated, says Stephen Sauer, director of Cybertip.ca at the Canadian Centre for Child Protection. Organized crime rings based overseas pose as young women on social media platforms that teenagers use like Snapchat and Instagram.


They reach out to teens and give them sexual attention quickly. Users take advantage of the young boys’ level of development and impulsiveness, and hastily ask for an image or a video, Sauer says.


Then the threats begin.


Sauer says the anonymous users, knowing there will be a sense of shame, say they will send the images to family and friends if the teens don’t give them money.


Many of the teenagers — like Danny — empty their bank accounts. But, too often, when the blackmail continues, they take their own lives.


The RCMP’s National Child Exploitation Crime Centre received a total of 52,306 complaints for the year 2020-21 — a 510 per cent increase from seven years earlier. Experts have pointed to increasing online activity during the pandemic as a contributing factor.


Cybertip, Canada’s tip line for reporting online child sexual abuse, had an average of 20 reports a month for this type of sexploitation in 2021. It shot up to 55 a month this year and increased further to 75 reports in May.


Mounties from coast to coast have put out warnings. Calgary police cautioned earlier this month that they’ve had nearly 50 cases in that city alone since the year began. “We believe these crimes are vastly under-reported,” Staff Sgt. Graeme Smiley said.


Police are telling parents to talk with their kids about online risks. RCMP say any sexploitation victim should stop communication with the instigator and notify a trusted adult, Cybertip or police.


Danny’s parents say at least two other boys in their small Manitoba community were targeted in the months since their son’s death.


Pilot Mound, with a population of just over 600, was the ideal place to raise their son and two daughters, they say. People look out for each other and there’s a sense of safety.


They never expected a threat from across the world would slip in through social media.


Daniel was calm and contented. He worked hard and bought his first mobile tablet with his own savings to play games with friends. Derek Lints talked to his son about staying safe online.


As Daniel grew older, he was given more freedom online. He told his family about a presentation at school about Amanda Todd, who took her own life at age 15 in 2012 after years of online sextortion. A Dutch citizen is on trial in British Columbia and has pleaded not guilty to five charges, including criminal harassment and communication with a young person to commit a sexual offence.


One in three internet users in the world is a child — one in five in Canada. Many countries are pressuring social media companies to ensure platforms are safe for that demographic.


The European Union recently agreed on landmark regulation for tech giants. Australia and New Zealand are moving in the same direction.


Sauer says social media platforms have a responsibility to keep kids safe. There’s much more they could do, he says.


“There seems to be a lack of will and a lack of pressure and obviously a lack of regulation in this space.”


More than 10 years after Todd’s death, the Lintses are frustrated that children are still endangered. They want every parent and teenager to be aware of sextortion scams. They want pressure on social media companies to keep children safe.


“This is our way of fighting back against these predators that stole Danny from us. This is what we can do right now,” Jill Lints says.


“We can tell everybody.”


Where to get help


If you know about a child who is in immediate danger or risk, call 911 or your local police.


This report by The Canadian Press was first published June 19, 2022.