Mayor returns to work after threats over Christmas parade 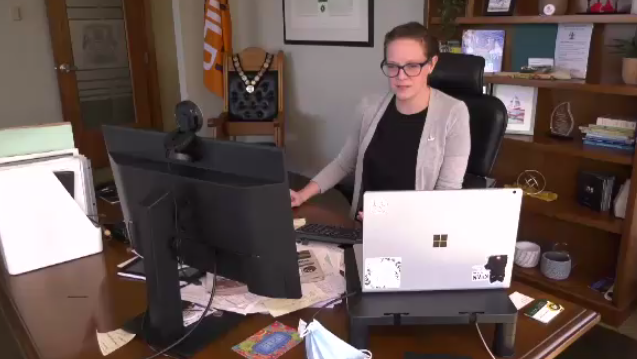 Twenty-four hours after receiving threats over changes to a Christmas parade, Cape Breton Regional Municipality Mayor Amanda McDougall was back on the job Tuesday.


But she admits it’s been hard to focus on her work.


It all comes from the decision to change the route of this year’s Sydney Santa Claus Parade — a decision McDougall says she had no part of.


Some in the community of Whitney Pier, N.S., are angry because Santa will not be parading through their community, and the mayor says she feels unfairly targeted with threatening messages, such as:


“’You better watch out because the Pier is going to get you and it’s easy to find you, I know where you park at City Hall,’” said McDougall. “They make a person feel quite uneasy. I know driving here this morning and going around that corner to my parking spot, it didn’t feel great.”


Lorne Green is the CBRM councillor for the Whitney Pier area.


“I’ve got the nasty emails, the awful phone calls; the social media rant about me. I’ve got the same thing.”


Green says he’s been getting criticism from the other side for wanting the original route put back in place to include his community.


“The onus was on CBRM to say it’s a Sydney Christmas parade and here’s the route if you’re interested, but the way it came down is the committee dictated the route and I don’t think that was right because that is not the Christmas parade route,” said Green,


The Sydney business community that’s organizing this year’s parade said they plan to rebrand the event to include the history behind it, but have no plans of changing the route.