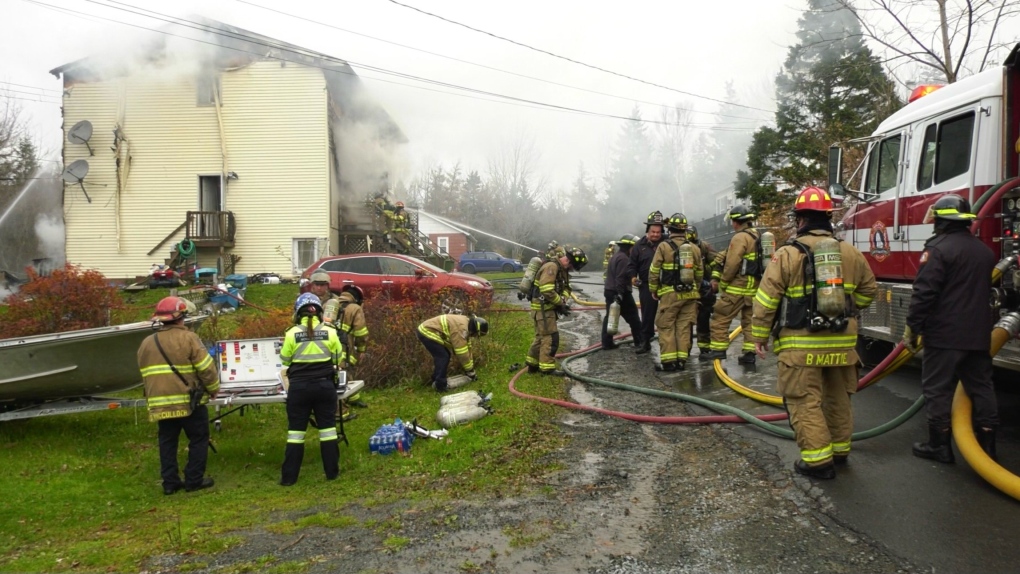 A duplex in Eastern Passage, N.S., has been destroyed by fire, leaving two families homeless.


Halifax Regional Fire and Emergency was called to a “major” house fire on McKay Lane around 7:45 a.m. Tuesday.


Residents were home when the fire started.


“Our main concern was making sure everybody was out of the home,” District Chief Jim Stymiest told CTV News Tuesday morning.


Four people were examined at hospital for smoke inhalation and minor injuries.


The fire was under control around 8:30 a.m. and has been deemed a total loss, according to Stymiest.


McKay Lane was closed about an hour-and-a-half but has since reopened.


Power to the street was also disconnected as crews worked to fight the fire.


Now, six people, including Sonja Watson, are looking for somewhere to live.


“I was watching YouTube with my son and I could smell something burning. I thought somebody was burning brush,” says Watson.


She then looked outside through her back door.


“My deck was engulfed in flames.”


Watson says she grabbed her young son and her dog and escaped the burning duplex.


“I tried to grab the cat, but I couldn’t get her,” an emotional Watson told CTV News.


In addition to Watson’s cat, a second pet also died in the fire.


“There was a man who lost his dog and he was very distraught over that,” says Eastern Passage resident Mary Nish.


Nish adds that the entire neighbourhood is rallying around those affected by the fire.


“I’m thankful all the humans made it out. Everything in the house be replaced. None of the home occupants have insurance, so they are left in a place that is unknown at the moment,” she says.


The local MLA is asking for donations for the two families who lived in the homes.


Barbara Adams says anyone who would like to donate gift cards for clothing, food or other essential items can drop them off at her constituency office at 1488 Main Rd. in Eastern Passage.


“To help the family get clothing and essential needs until they can find some place to live,” says Adams. “When it happens to one of us it happens to all of us.”


The cause of the fire is under investigation.