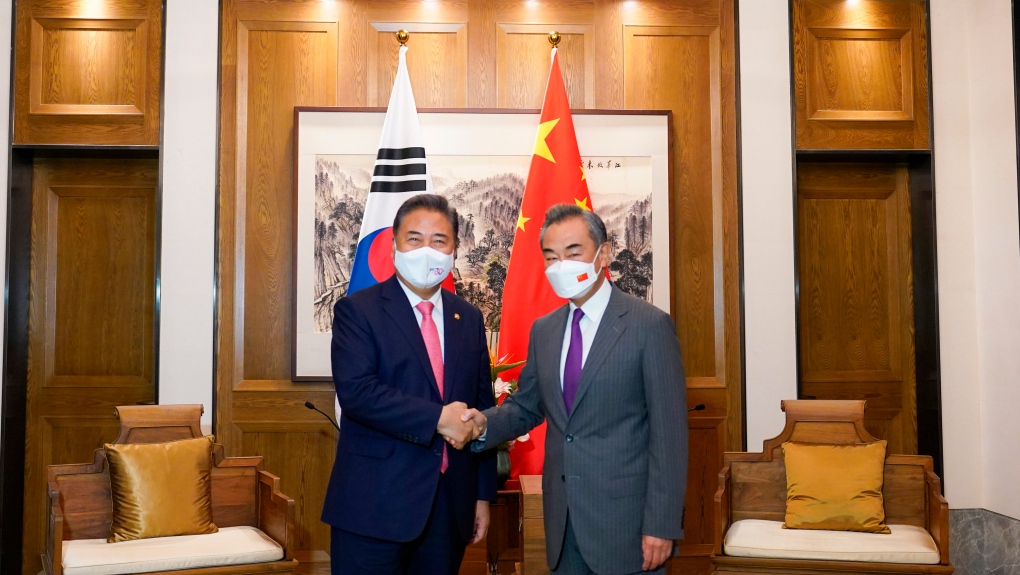 
The top South Korean and Chinese diplomats pledged Tuesday to develop closer relations and maintain stable industrial supply chains at a time of deepening rivalry between Beijing and Washington.


South Korea, a longtime U.S. ally, is struggling to strike a balance between Washington and the increasingly assertive foreign policy of Chinese President Xi Jinping’s government. U.S.-Chinese conflict over Taiwan has added to complications for governments that want amicable ties with both sides.


Foreign Ministers Park Jin and Wang Yi, in separate statements from their meeting in the eastern Chinese city of Qingdao, called for the development of relations based on three decades of successful commercial ties.


Park and Wang gave no indication they discussed tensions over last week’s visit by U.S. House Speaker Nancy Pelosi to self-ruled Taiwan, which the mainland’s ruling Communist party claims is Chinese territory. Beijing reacted to her visit by conducting military drills to intimidate the island and called off dialogue with Washington on climate change and other issues.


Pelosi visited South Korea last week, but Yoon, who was on vacation, talked to her by phone instead of face to face. His critics accused him of avoiding seeing her to protect relations with China.


Park and Wang called for maintaining stable industry supply chains, a possible reference to fears that Chinese technology policy and U.S. security controls might split the world into separate markets with incompatible standards and products, slowing innovation and raising costs.


Park expressed hope the two sides will increase co-operation based on “universal values and standards.” He said they should overcome new challenges posed by a “great transition in international society” but gave no details.


Park appealed to Beijing to help persuade North Korea to return to talks on its nuclear weapons program, which he called an “unprecedented threat” to peace on the Korean Peninsula.


Park stressed that the UN-led international community should respond to major North Korean provocations with stern and unified measures and urged closer consultation between Seoul and Beijing over the North’s accelerating efforts to expand its arsenal, according to his ministry.


China and Russia recently vetoed U.S.-sponsored resolutions at the UN Security Council that would have increased sanctions on the North over some of its ballistic missile testing this year, underscoring division between the council’s permanent members that deepened over Russia’s war on Ukraine.


Wang’s statement didn’t mention the nuclear issue and gave no indication whether he said what Beijing might do. The South Korean Foreign Ministry said Wang told Park that China will continue to make possible efforts for peace in the Korean Peninsula.