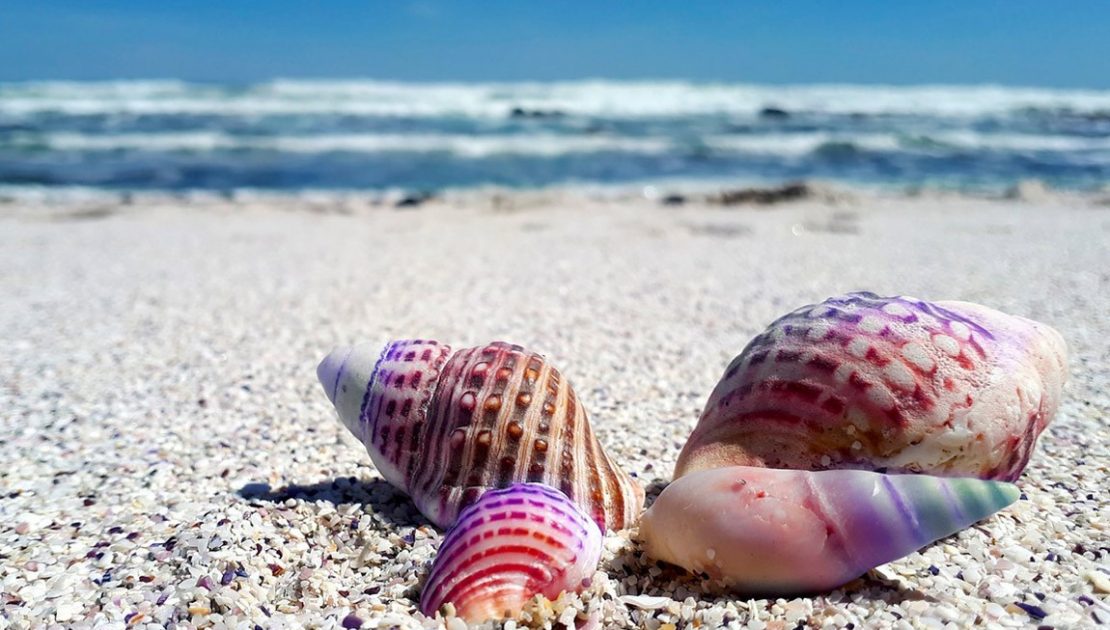 ‘Can you take shells from the beach?’

‘Is it bad to take shells from the sea?’

They are questions I often hear. The answer may surprise you, but, leaving seashells where they are is actually one of the easiest ways to protect marine life and make a small contribution to saving our oceans.

Let’s talk about seashell souvenirs. Those large conch shells, a picture frame decorated with shells, or one of those pretty seashell necklaces… We have all seen them, right? And most of us have probably bought or received a seashell souvenir at least once.

But did you know that these shells are often harvested with living animals still inside of them?!

And this is just one of many reasons why seashells belong on the beach, and not in our homes.

But, before I tell you more about why you shouldn’t take or buy seashells, I have to start with a confession: until recently I didn’t know most of this either and yes, I have taken shells from the beach as well…

A few years ago I went to Eilat, a small coastal town in Israel, to volunteer at a coral reef conservation project. It was here that I learned you shouldn’t take shells from the beach. And I saw the striking difference between a protected beach where no shells, starfish, dead coral, etc. are taken versus one where people can do whatever they want…

The difference is shocking! Not only are there more beautiful shells on that protected beach, the coral reef is healthier and there are so many more colorful fish to admire!

So, ever since then I’ve been trying to explain why we shouldn’t take shells from the beach or the ocean. Which is exactly what I want to share with you in this article.

You might be wondering: what’s wrong with taking just one shell? What difference does it really make? Well, it can make a world of difference.

Depending on the shell you take, you could be robbing an animal of a home, building material, food or even disturbing an entire ocean ecosystem.

Also Read: What is Ecotourism & How to Be a More Sustainable Traveler

Here are a few reasons why you should leave seashells where they are:

1. It Robs a Sea Creature of a Home / Shelter

Let’s say you find a pretty shell on the beach. A spiral shell for example. And you decide to take it home with you.

Sure, they are beautiful, but did you know that hermit crabs depend on empty spiral shells for their survival? These sea creatures need to move homes when they get too big for their current shell. If they can’t find a larger one, they’ll die from exposure or get gobbled up by a predator.

Or they can use our trash as a new home as you can see in this short, sad BBC video:

Small fish and octopuses also use shells for shelter and protection. Check out this amazing video of an octopus that was discovered using a plastic cup instead of a shell for protection.

Imagine what would happen if we continue to rob ocean animals of the tools they need for their survival.

And it’s not just to protect marine life. A large number of birds use parts of seashells to build nests.

Buying shells from shops – just don’t do it! Yes, these shells are in great condition, but that is because they were collected alive.

A 2015 study documented the effects of this harmful harvest. Vincent Nijman, an anthropology professor at Oxford Brookes University in the UK, followed the illegal trade of Indonesia’s protected shells.

He found that poaching of these protected shells is rampant. “We are talking about a large-scale, commercial trade where the shells are collected by active fishing (scuba diving, cages, etc.) and where entire sections of the ocean floor are emptied,” he said.

His more recent 2019 study shows that protected shells are still widely sold, that illegal traders are rarely successfully prosecuted, and that shells often make their way abroad, to be sold anywhere from the USA to China.

Then there’s Amey Bansod, who came across this cruel practice firsthand in Kanyakumari, India. According to this article in National Geographic, he witnessed mountains of “newly harvested mollusk shells- living animals still inside them,” that were put through a horrifying process, including being laid out to dry in the sun and then dunked in oil and acid.

Those shells were then shipped to artisans in nearby towns who make jewelry and other mementos to sell to tourists.

A similar practice of exploitation allegedly occurs in the Philippines, Indonesia, and throughout the Caribbean.

This Indian documentary, although a few years old, shows part of the industry and displays some of the large piles of shells that are taken from the sea.

3. It Exacerbates Existing Issues of Overtourism

Let’s get real here – is collecting shells (i.e. “shelling”) by beach walkers or divers really going to strip the ocean of all its shells? Of course not. But a reduction in shell abundance due to tourist activity has already been documented at a Spanish beach.

This is outlined in a study that found a 60 percent decrease in the number of shells on a beach in Spain over a period of 30 years. This correlates with a huge increase in tourism over the same time period.

Researchers believe that shell collecting surely had a role to play, but that there were potentially other factors involved as well including the use of recreational vehicles, recreational clam harvesting as well as the grooming and cleaning of the beach with heavy equipment during summer months.

So, shell collectors weren’t completely to blame – but tourist activities certainly were. If we are already responsible for this decline, why add to it by taking what doesn’t belong to us?

Plus, if we all thought the same way – i.e. “I’ll just take a few shells, I’m just one person, what difference could it make?”, well, we’re going to end up in deep trouble!

4. It Can Affect the Ocean’s Ecosystems & Increase Shoreline Erosion

The ocean supports many delicate ecosystems. If one thing is out of balance, the results can be devastating.

For example, some experts say the removal of shells can impact shoreline erosion patterns. This could have dire effects on coastal populations, especially in combination with global warming and rising sea levels.

Not only that, but every shell performs some ecological role. For example, the queen conch helps keep the Caribbean’s waters clean and provides food for animals like the loggerhead sea turtle and nurse shark.

“Like any exploitation of the natural world, if you take out more from the environment than is sustainable, then that environment and the ecosystem collapse,” – Neil Garrick-Maidment, executive director of The Seahorse Trust

5. It Could Be Illegal and You Could Face Fines

Thankfully, more and more countries make it illegal to take shells home with you.

Costa Rica, for example, prohibits the removal of any shells, and the Philippines has created a long list of ‘forbidden shells‘.

And a tourist was jailed for collecting seashells on a Florida beach.

A tip from José Leal, science director and curator at the Bailey-Matthews National Shell Museum: do not collect shells from any protected species even if there is no living creature inside. The queen conch, for example, is listed in the Convention on International Trade in Endangered Species.

He also advises never to collect shells in National Parks or protected lands.

It’s always better to research the rules and regulations of a particular country before you decide to take home a beachy souvenir. Or even better: take nothing but photos!

Yes, You Can Make a Difference and Help Protect Marine Life!

Like I’ve said, every shell can make a difference.

It reminds me of a story I like, titled The Star Thrower, by Loren Eisley. Here is a short version of it:

“While wandering a deserted beach at dawn, stagnant in my writing work, I saw a man in the distance bending and throwing as he walked the endless stretch toward me.

As he came near, I could see that he was throwing starfish, abandoned on the sand by the tide, back into the sea.

When he was close enough I asked him why he was working so hard at this strange task. He said that the sun would dry the starfish and they would die.

I said to him that I thought he was foolish. There were thousands of starfish on miles and miles of beach. One man alone could never make a difference.

He smiled as he picked up the next starfish. Hurling it far into the sea he said, “It makes a difference for this one.”

I abandoned my writing and spent the morning throwing starfish.”

This also brings me to one other thing I need to mention: don’t take dead starfish, sea urchins, or dead coral either! They too serve a purpose inside the ocean’s ecosystems.

Tip: if you are interested in marine conservation and volunteering abroad, check out this volunteer project in the Philippines

Say No to Seashell Souvenirs

I recently traveled to India. When I checked into my hotel, I was offered a lovely necklace made out of seashells. I felt conflicted. I didn’t want to be rude by refusing their gift. But I also didn’t want to support the seashell trade.

I eventually politely declined the necklace.

Don’t feel bad to say no! Saying ‘no’ to plastic straws has become the norm – why shouldn’t the same be true about collecting or accepting seashells?

Other Ways to Protect Marine Life

If you’ve been looking into how to save the oceans or how to protect marine life, you probably already know these tips.

But we can all use an extra reminder from time to time!

We all know this one: we need to use less plastic!

Use a reusable water bottle and be conscious of how much plastic products contain, especially single-use plastic such as bags, wrappers, and containers.

Whether you make it a habit to pick up any trash you see when you’re on the beach or organize clean-up events, it all helps!

Even though studies say most sunscreen labeled as reef-safe can still do harm to marine life, it’s a step in the right direction.

Apply sunscreen long before you get into the water so it has time to be absorbed. An alternative for using sunscreen is wearing clothes (a rash guard, board shorts, wetsuit, etc.) to provide UV protection.

If you eat seafood, go for sustainable options. This means eating species that have a healthy population, and whose harvest minimizes bycatch and impacts on the environment.

This resource offers useful tips on how to shop for sustainable seafood.

Balloons look pretty, but they are a danger to wildlife such as sea turtles, who can accidentally swallow them, mistake them for food, or get tangled in their strings.

So please, enjoy balloons at your party. But at the end of the party, throw them in the trash instead of releasing them.

And it could just be your straw that ends up inside a turtle’s nose (remember that video??) and it could very well be that shell you decide to leave on the beach that becomes the perfect home for a hermit crab or the essential shelter for those baby fish…

So please, leave seashells where they belong and share this article to help make more people aware of how easily they can make a difference!

Special thanks to Sandra Parmee and H. Duff, the great journalists who helped me put this article together!

Disclaimer:  As an Amazon Associate I earn from qualifying purchases.