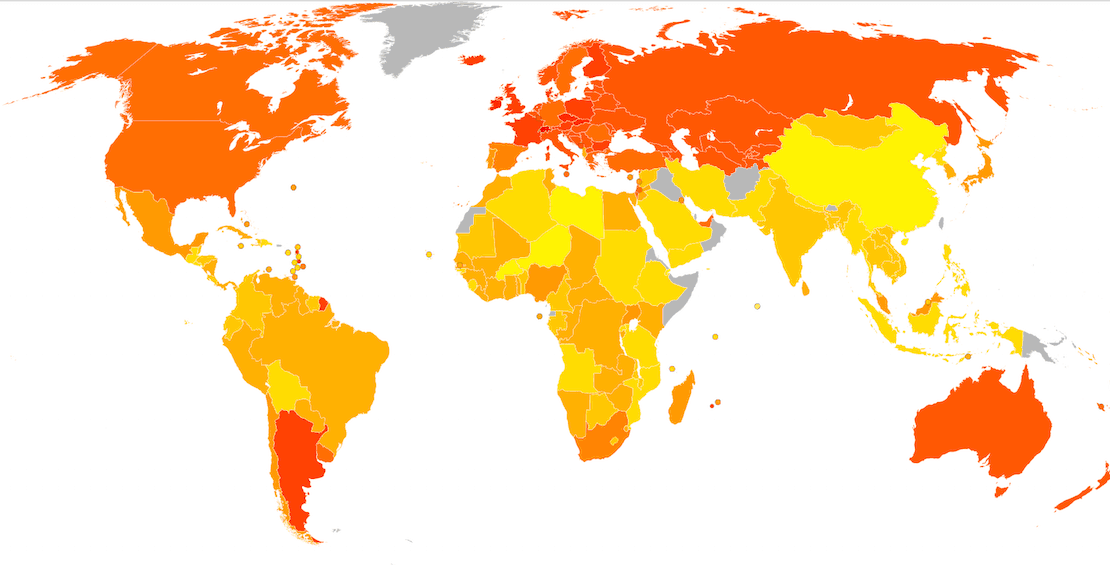 When driving through 15 countries from England to Mongolia in the Mongol Rally, many people expressed concerns about the countries that we were driving through. Sure, we faced corruption and some places will feel like the Wild West of years gone by, but there are more dangerous places in the world. None of the countries listed below were on our route to Mongolia.

But we have even been to The Sudan, we’ve been on the Pakistan border and we have had a friend travel through Afghanistan. All are listed as the Most Dangerous countries on earth.

While this post rounds up dangerous destinations, we aren’t saying to leave them off your travel list forever. Things change and we have visited many destinations on travel watch lists and ended having a wonderful time.

This post was written in 2012, it has not been updated.

People from all over the world love to travel; however, you need to think twice and do your research before visiting these hostile destinations.

Louis Armstrong sang a song titled, “What a Wonderful World.” Although he is correct that this is an amazing world in which we live in, all parts of the globe are not necessarily safe to visit. In fact, there are some places that are quite dangerous. Drugs, murder and terrorism are all signs of the perilous world today. Crime is also rampant all across the globe.

Syria is a country in civil war. 250,000 people have lost their lives and refugees are fleeing the country. 11 million people have been displaced. It doesn’t look like there is an end in sight.

Millions of innocent people have been caught in the cross fire of President Bashar al-Assad supporters and those opposed to his rule. The jihadist group Islamic State (IS) has also risen and all sides have been accused of war crimes.

Afghanistan is a country at war. There are land mines dispersed throughout the region, and bombings are a regular affair in the country. Military operations continue to occur in Afghanistan, and there is an array of political unrest in the area.

Parts of the country are under control of the Taliban, al-Qaeda and Islamic Jihad Union. Afghanistan remains an unpredictable and unstable environment.

Saddam may be gone, but the threat is still real. There are terrorist’s organizations and militia groups that place bombs in markets and beside the roads.

Sometimes these groups take hostages and kill them. Ironically, the presence of military troops from other countries has made Iraq even more dangerous. Foreigners could be in danger when they visit Iraq.

The country of Somalia seems to be in chaos because there is no government. The country has become a home for warlords, pirates, kidnappers, Islamist insurgents and angry young people.

Tensions from surrounding borders are trickling into Somalia, and the seas around the country are infested with pirates. Somalia also is suffering from drought, war, famine and high food prices.

Militants operate freely along the Pakistani border. Pakistan also consists of massive bombings that kill hundreds of people. Violence in the country is out of control, and there are many kidnappings every day in the area.

The Afghan border probably the most dangerous places to be in the country.

We visited the Pakistan border when we were in India and the people on the other side were friendly. Read about our experience.

This country is afflicted with lawlessness and conflict. There are armed militias, military and policemen who pose threats to people in the region.

The military is guilty of corrupt behaviour and abuse, often attacking women. Illegal armed militia groups operate in the area, often using brutal violence, such as rape, on their targets.

Law enforcement officials are non-existent, and justice is nowhere to be found in the country.

Lack of control and banditry are not uncommon in Sudan. The country poses a risk of terrorism, violent crime, or getting trapped in crossfire of the genocide or militia attacks.

There are religious extremist in the area that could be drastically against your presence just because of your religion or nationality.

See our cycling trip through Sudan.

Al Qaeda is in existence in Yemen, as it is considered to be the home of some of Bin Laden’s most loyal supporters. In addition to Al Qaeda, Houthi rebels in the north keep this nation in constant unrest.

Criminal gangs are known to be active in Guinea, and police presence is almost non-existent in the area. There seems to be constant fighting in the region that started in Liberia more than a decade ago.

The area is also considered to be suffering with an overwhelming amount of AIDS cases, and the people live in poverty.

Nigeria has been the source of periodic episodes of violence for decades. There are many Christian and Muslim disputes that plague the area. The country has been torn apart by wars, violence and ethnic conflict, making the area very unstable.

So when it comes time to plan your next holiday, we suggest you avoid the above, unless of course it’s necessary to travel there, or you really are an extreme adrenaline junkie!

Clearly most of these countries listed are common sense. Don’t go to a country that is in the middle of a war. That’s normally a good rule of thumb.

However, with the proper research and planning, we would be open to visiting all countries and would definitely visit Pakistan, and plan to in the near future.

Have you recently travelled to any of the places listed above? Do you agree or strongly disagree with any of the countries mentioned? Let us know and lets get the discussion started.

Battling The Indian Passport Curse To Travel The World

Kumarakom – Entering a Time Warp in the Kerala Backwaters